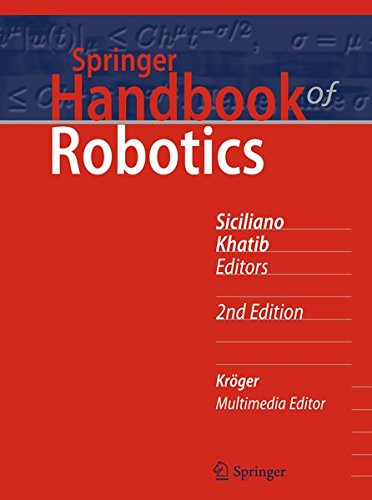 The second edition of this handbook provides a state-of-the-art cover view on the various aspects in the rapidly developing field of robotics. Reaching for the human frontier, robotics is vigorously engaged in the growing challenges of new emerging domains. Interacting, exploring, and working with humans, the new generation of robots will increasingly touch people and their lives. The credible prospect of practical robots among humans is the result of the scientific endeavour of a half a century of robotic developments that established robotics as a modern scientific discipline. The ongoing vibrant expansion and strong growth of the field during the last decade has fueled this second edition of the Springer Handbook of Robotics.

The first edition of the handbook soon became a landmark in robotics publishing and won the American Association of Publishers PROSE Award for Excellence in Physical Sciences & Mathematics as well as the organization’s Award for Engineering & Technology.

The second edition of the handbook, edited by two internationally renowned scientists with the support of an outstanding team of seven part editors and more than 200 authors, continues to be an authoritative reference for robotics researchers, newcomers to the field, and scholars from related disciplines. The contents have been restructured to achieve four main objectives: the enlargement of foundational topics for robotics, the enlightenment of design of various types of robotic systems, the extension of the treatment on robots moving in the environment, and the enrichment of advanced robotics applications. Further to an extensive update, fifteen new chapters have been introduced on emerging topics, and a new generation of authors have joined the handbook’s team.

A novel addition to the second edition is a comprehensive collection of multimedia references to more than 700 videos, which bring valuable insight into the contents. The videos can be viewed directly augmented into the text with a smartphone or tablet using a unique and specially designed app.